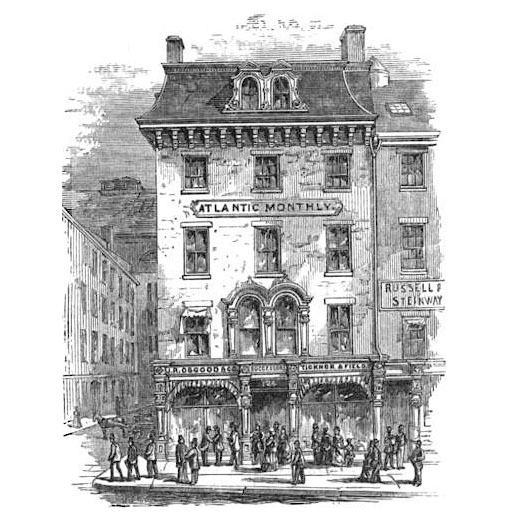 In 2021 we added an entirely new feature for subscribers of multiple products: Cross Search.

With apologies to the late columnist Syd Harris for aping his column format, here is a list of interesting factoids uncovered regarding the Atlantic Monthly index. Search the Atlantic as well as 100+ other sources across all three products using Cross Search today.

Things I learned about the Atlantic Monthly…

…that the salary of the first editor of the Atlantic, James Russell Lowell, was $2,500—much higher than other magazine editors in the 1850s. Lowell left the publication in 1861, allowing the proprietors Ticknor & Fields to reduce this amount considerably when they hired the next editor.1

…that Martin Luther King, Jr. sent the Atlantic a manuscript draft of his “Letter From Birmingham Jail,” which was published in 1963.2

…that despite its high-minded literary ideals, the Atlantic included advertisements for quack patent medicines in its issues.3

…that the Atlantic was a prominent voice defending Nicola Sacco and Bartolomeo Vanzetti prior to their execution in 1927. (The pair had been wrongfully convicted of murder in 1921 after a widely-publicized trial.)4

…that the original title of the magazine was almost The Orient, but the proprietors were wisely steered away from that option in favor of the Atlantic.5

…that the Atlantic’s editors paid poet Julia Ward Howe $5 to publisher her “Battle Hymn of the Republic.”6

…that when the Atlantic began publication in 1857, it contained the next installment in a serial novel called the Autocrat of the Breakfast Table that had last been published in New England Magazine twenty-five years before. To bring the series back from this quarter century hiatus, the character that had been speaking before the serial was abandoned simply jumped into conversation with “As I was saying….”7

…that during his tenure as editor, James Russell Lowell offended Henry David Thoreau to such a degree that Thoreau refused to publish in the Atlantic until Lowell had left the magazine. (Lowell had deleted a line from an article Thoreau had submitted.)8

…that the 1873 short story “Marjorie Daw” written by Thomas Baily Aldrich was so popular with readers that the resulting swell in magazine sales brought the magazine back from a financial precipice.9