“‘Snap-Shots’ of the Scenery”: Aerial Photography at the Turn of the Century
29 April 2020 by Grayson Van Beuren 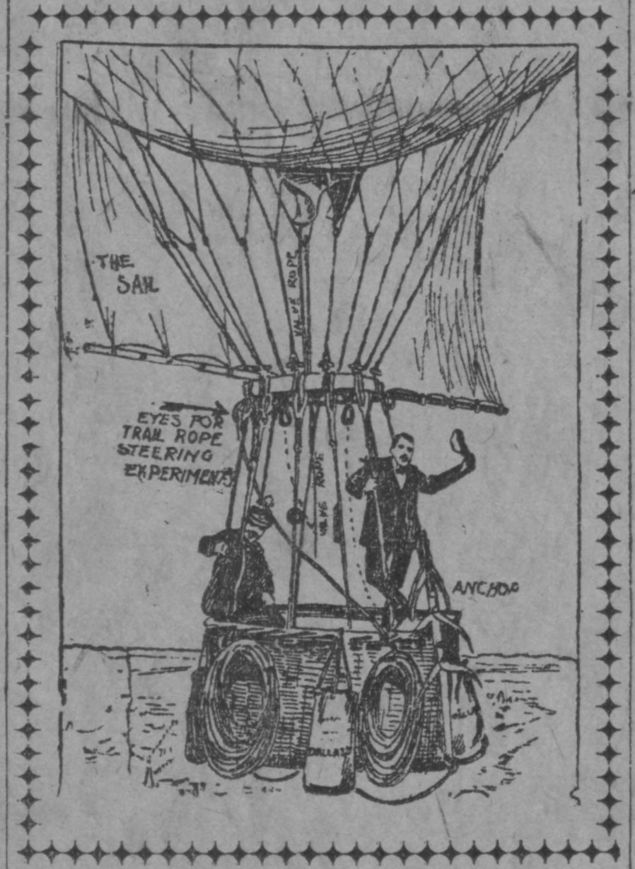 Today we continue our series exploring the most out-of-the-way corners of the history of science to be found in the Catalogue of Scientific Papers. Those unfamiliar with this fascinating source from the Royal Society should check out our description of the CSP.

The first aerial photographs date from long before powered flight. Though we capture such pictures relatively easily using satellites and drones nowadays, people began taking photos from dizzying heights back when hydrogen balloons were the only available vertical conveyances. This post explores one high altitude photographer through profile found in a 1900 issue of the Aeronautical Journal, indexed in the Catalogue of Scientific Papers. 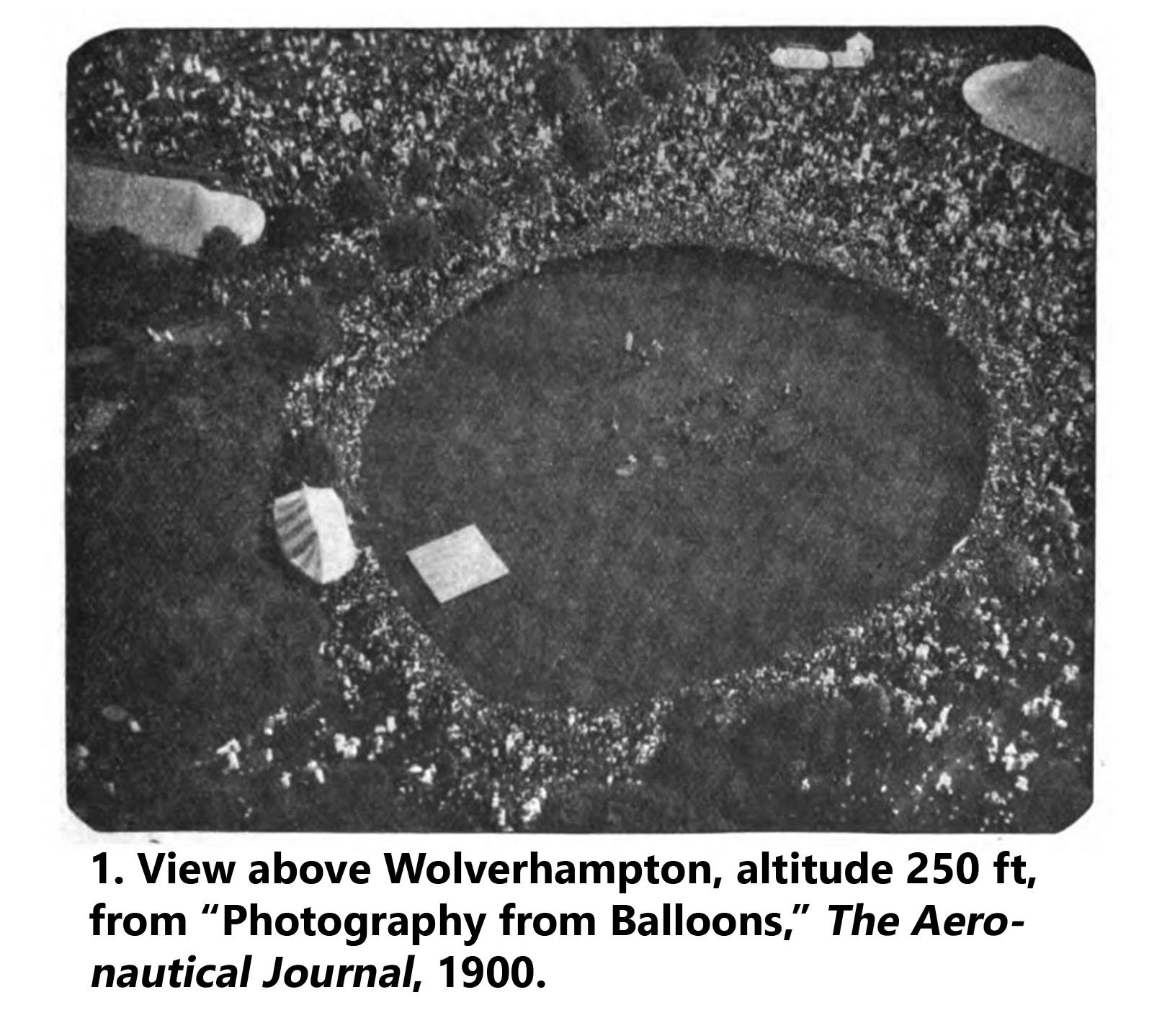 Imagine taking a trip a thousand feet in the air, with nothing but a wicker basket and a giant balloon of flammable hydrogen gas holding you up. Imagine your craft has no real controls except ballast and a gas release line. Imagine being so entirely at the mercy of the weather that your eye for clouds and the sharpness of your wits become your only defenses against death.

Now imagine dealing with all of that… plus the apparatus and mental calculus required to produce professional photographs in the nineteenth century.

That was the subject of an article that appeared in the Aeronautical Journal in 1900 titled “Photography from Balloons.”1 In it, balloonist Percival Spencer detailed his experiences and provided readers with the photographs gleaned from his trips over the last year. In true British form, Spencer is blasé and understated about his trips skyward:

During the past season, I have […] made “snap-shots” of this scenery over which the balloon has crossed.2 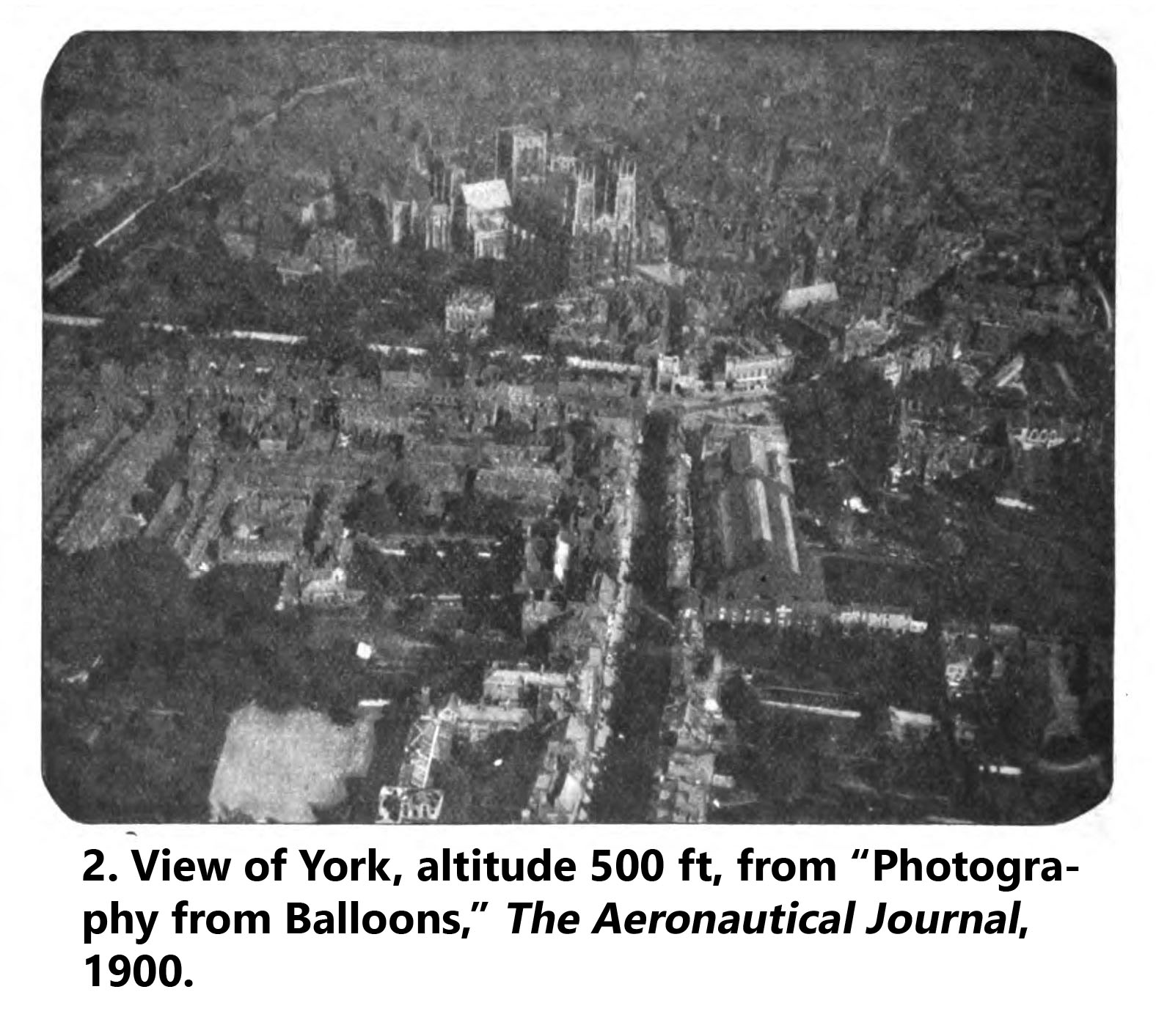 Spencer would have been well known to the audience of the Journal in 1900. An almost mythical figure in the world of ballooning, Percival Spencer and his four brothers came from a ballooning royalty: the elder Spencer and his father were both famous aeronauts in their own right, and the family owned a well-known ballooning-supply company.3

Percival himself first went up in a balloon at age eight. He made a career out of daring balloon feats, delighting in “pushing the envelope”—as aviators of the generation after him would put it. According to one source, Spencer reached the chilling altitude of 15,000 feet on one trip and experienced the unbelievable speed (for the time) of 60 miles per hour on another.4 Spencer also made a career of flying in as many foreign countries as he could. A Star article from 1900 gave a partial list of the countries Spencer had lifted off from: 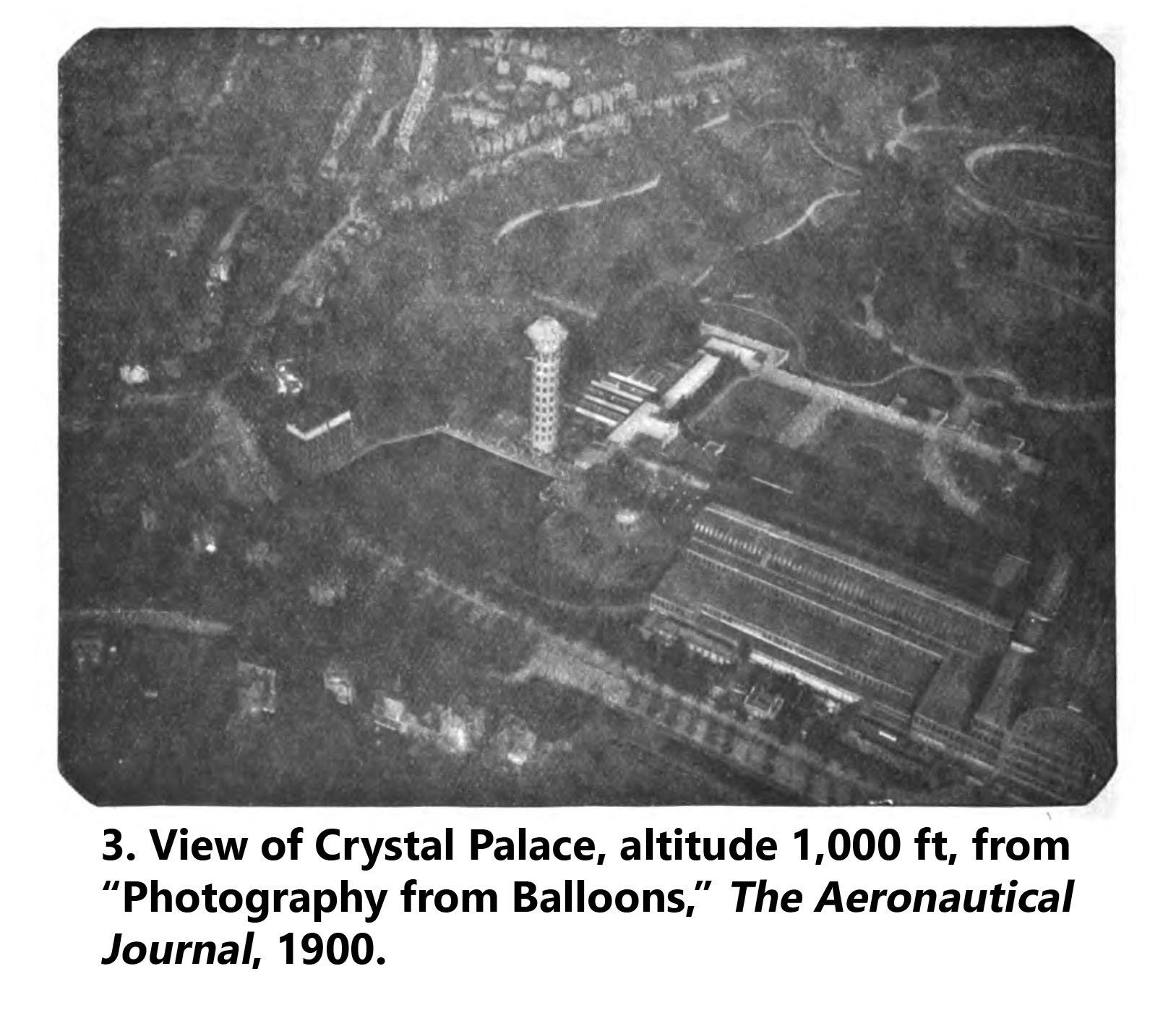 India, the Straits Settlements, Java, Sumatra, China and Japan, with Egypt on his way home, have, in turn, been the land from which he has ascended5

Spencer’s photos in the Journal aren’t quite from those storied locals abroad, but they are no less interesting for it. They depict a turn-of-the-century England that no longer exists from a rare vantage point.

His first photo was taken above the village of Wolverhampton at an altitude of 250 feet. Barely visible in the photo-reproduction printed in the Journal are the crowds below watching him ascend. The second photo shows the city of York from 500 feet. Spencer’s third “snap-shot” showed the Crystal Palace—a well-known London landmark of the time—from a thousand feet up. The fourth photograph is the highest of the bunch. It showed the coastal town of Hastings from 5,000 feet, taken during an English Channel crossing.6

In addition to the photographs themselves, Spencer let us in on some behind-the-scenes information. His choice of camera for the trips was a hand-held Frena over a bulkier tripod model, perhaps chosen for its relatively easy-to-use film plate mechanism.7

Also, Spencer advised any would-be aeronautic photographers to keep their exposures under 1,000 feet for the best results: 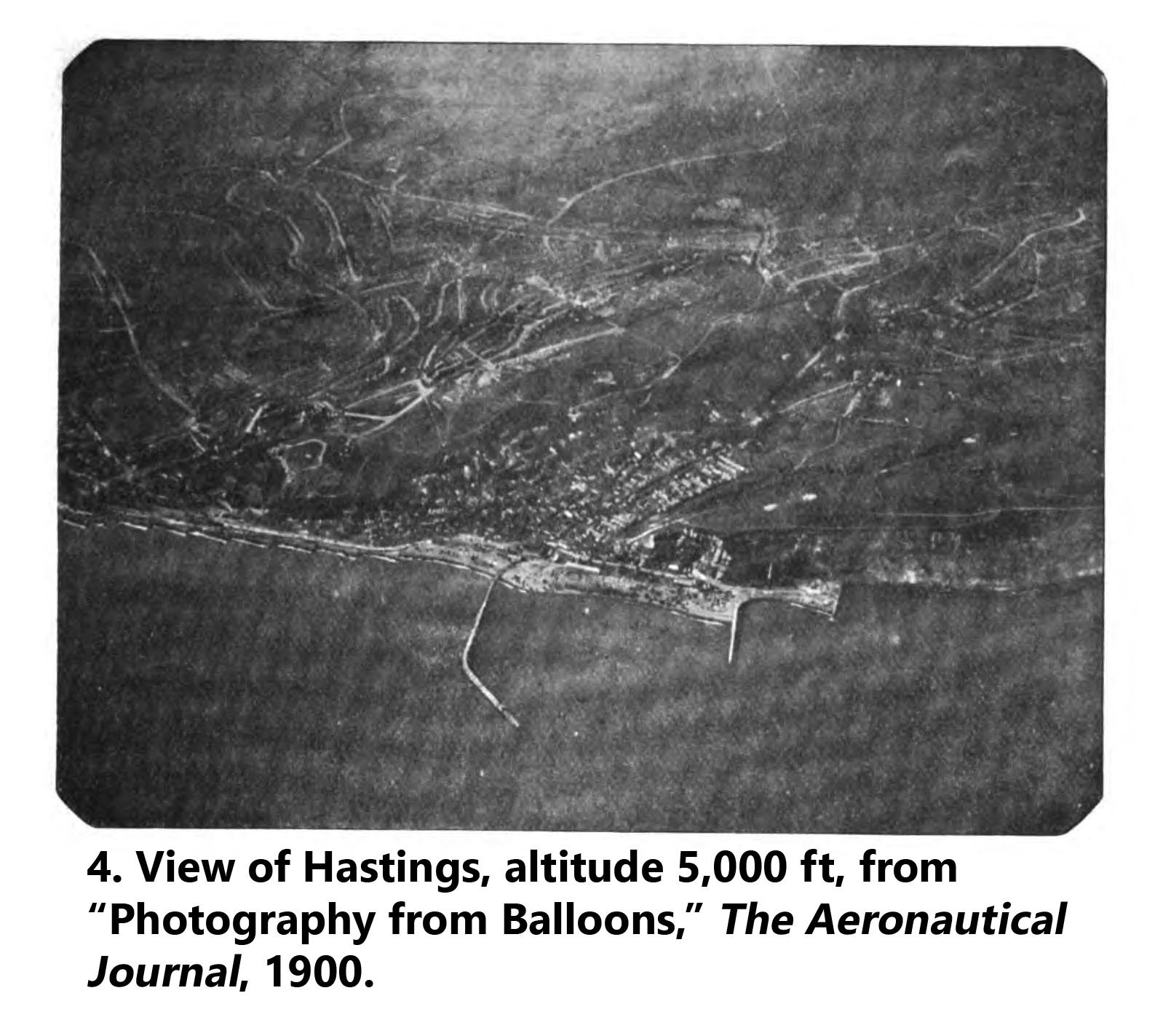 Sometimes even up to 10,000 feet a picture may be obtained, but often exposures made at this altitude and at other heights down to a thousand feet are not successful, owing to the veil which pre- vents the actinic power of the reflected light from the earth penetrating through to the sensitive film in the camera.8

In an era when aerial photographs are relatively easy and safe to create, it’s hard to imagine a world where a photograph from 1,000 feet took a literal feat. Next time you come across some drone footage or check Google Earth to see your hometown from above, think about those who went up in wicker baskets to achieve the same aim.

Users of Eight Centuries can access entries from the Royal Society’s Catalogue of Scientific Papers. Check your institution’s database subscriptions to find if you have access to Eight Centuries, or sign up for a free trial at https://public.paratext.com/customer/.