“Publick Occurrences Both Forreign and Domestick”: The Short but Significant Life of the First Multi-Page Newspaper in the Americas
18 September 2019 by Grayson Van Beuren 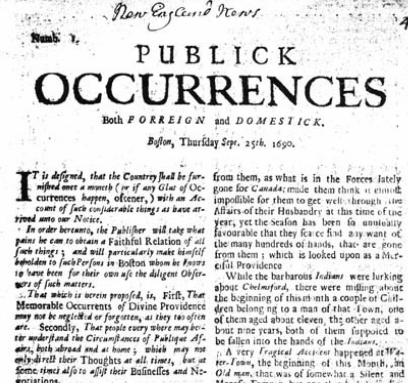 “It is designed, that the Country shall be furnished once a month (or if any Glut of Occurrences happen, oftener,) with an Account of such considerable things as have arrived unto our Notice.”

On Thursday September 25, 1690, a singular event occurred in Boston. A collaboration between a publisher, Richard Pierce, and a Londoner-turned-colonial editor, Benjamin Harris, came to fruition in the printing of a newspaper: Publick Occurrences Both Forreign and Domestick. Single-sheet news bulletins (called “broadsheets,” in reference to their paper size) had been printed before, but Publick Occurrences clocked in at three-and-a-half pages of text—making it the first true multi-page newspaper in the Americas.1

So what precisely constituted “news” to a seventeenth century American colonist? Harris and Pierce make note of the activities of groups of local Native Americans, the suicide of a “Sober and Pious” man who had lately lost his wife, the spread of small pox (“Epidemica Fevers and Agues”) around the colony, destruction of parts of Boston from fire, and rumors of unrest in Ireland.2

Sadly, Publick Occurrences was short-lived: its first issue was its only issue. Four days after publication, the Colonial government ordered the newspaper shut down for printing without a license and providing readers with (what the government considered) “sundry doubtful and uncertain Reports.”3 Editor Harris was subsequently thrown into prison.4

Neither collaborator went back to newspaper publishing in the colonies afterwards. Pierce died the next year in 1691, and Harris turned his sights to book publishing until 1695 when he moved back to England.5 In 1699 he started another newspaper—the London Post—which did substantially better, running until 1705.6

The British colonists in America had to wait nearly fifteen more years for a regular multi-page newspaper: in 1704, printer John Campbell began his Boston News-Letter. Perhaps Harris and Pierce’s example served as a lesson for Campbell, as he obtained full license (and full oversight) from the Colonial government for the News-Letter.7

Users of 19th Century Masterfile: 1106 – 1930 have access to a trove of resources on early American history. Contact your library’s history liaison to set up 30 day trial at https://public.paratext.com/customer/.