“A Deficiency in our Political Annals”: Rivals of Early Congressional Reporting
27 September 2018 by Grayson Van Beuren 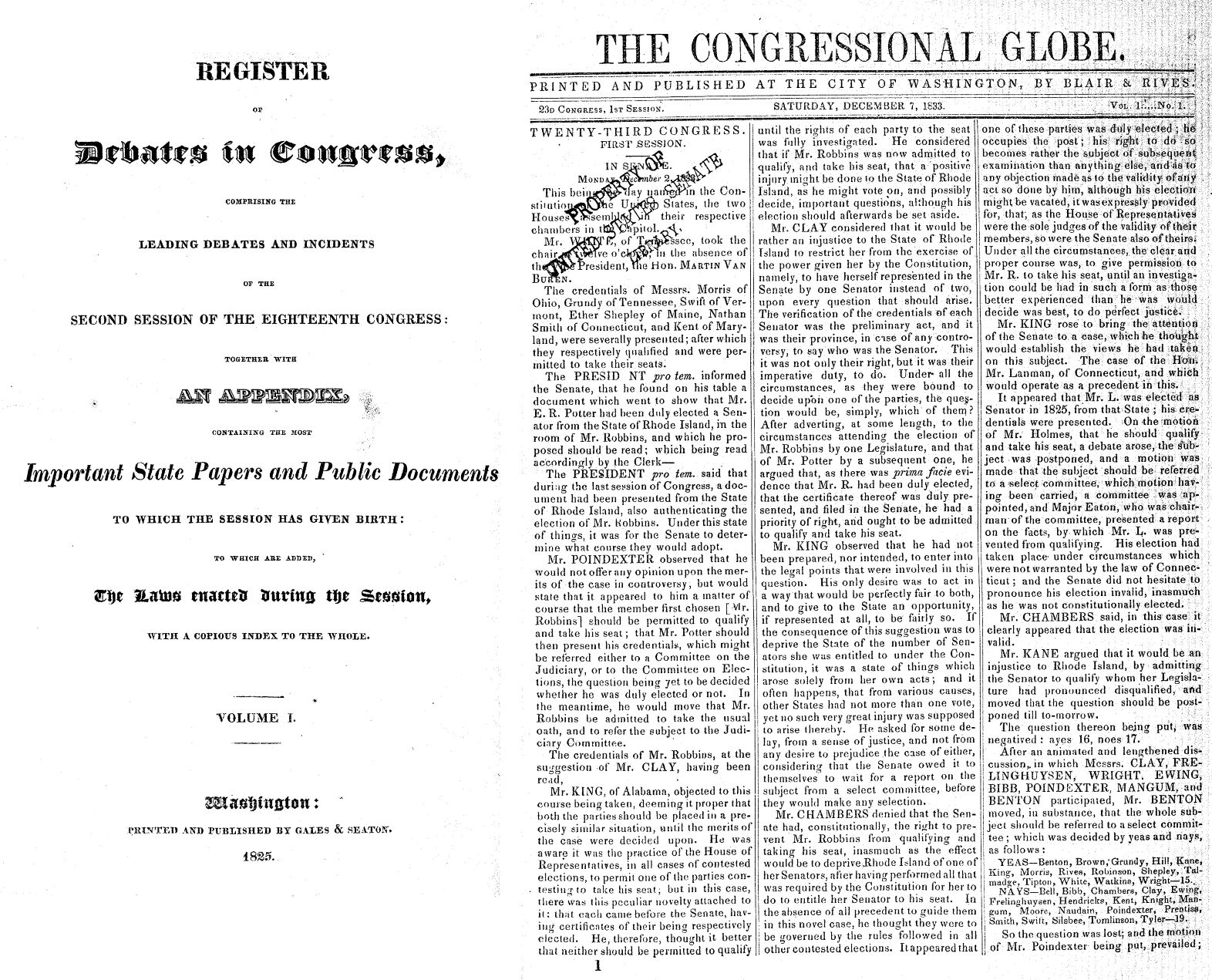 Exploring the Register of Debates and the Congressional Globe…

Today we will look at two mainstays of early Congressional reporting: the Register of Debates and the Congressional Globe. Both dominated the journalistic world of Congress and politics in the decades before the Government Printing Office began producing its official account of Congress—the Congressional Record—in 1873. And because the two overlapped in coverage, many assumed they were partisan rivals. But were they? We will explore this question and the histories of these two sources on this week’s Paratexting blog. –Ed

The Register of Debates and the Congressional Globe both grew out of a public desire not originally addressed by the federal government: contemporary reporting of Congress. These two publications—considered rivals by contemporaries—covered the debates and happenings in the House and Senate. The history of their publication is an early chapter in the evolution of “open government” in the United States.1

“…a deficiency in our Political Annals which […] has been universally acknowledged”

Washington printers Joseph Gales and William Seaton created their Register of Debates in 1825 explicitly to address this lack of contemporary source material on Congress. As they state in the preface to the first Register volume:

The Register of Debates in Congress is intended to supply a deficiency in our Political Annals which the Editors have long perceived, and which has been universally acknowledged and regretted by those who have mingled in public affairs, and especially by such as have engaged in the active discharge of political duties.2

The Register grew from brief records of Congressional debates that Gales and Seaton had included in their newspaper, the Washington Intelligencer. 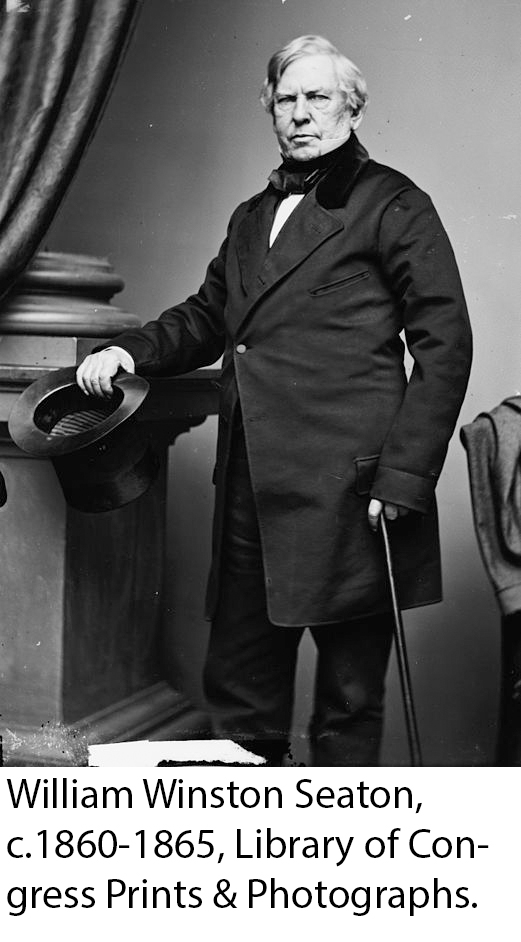 They turned this record into its own publication—the Register—in 1824, in so doing creating the first dedicated contemporaneous record of Congressional proceedings.3

Despite being compiled by reporters present in the House and Senate chambers, reports in the Register were not verbatim accounts. Rather they paraphrased events, giving a summary of proceedings and relayed speeches as well as could be expected from reporters employing proto-shorthand.4 Gale and Seaton also made a point of only recording what they thought “novel or important in its character, and therefore worthy of preservation,” leaving out what they considered mundane or unimportant.5 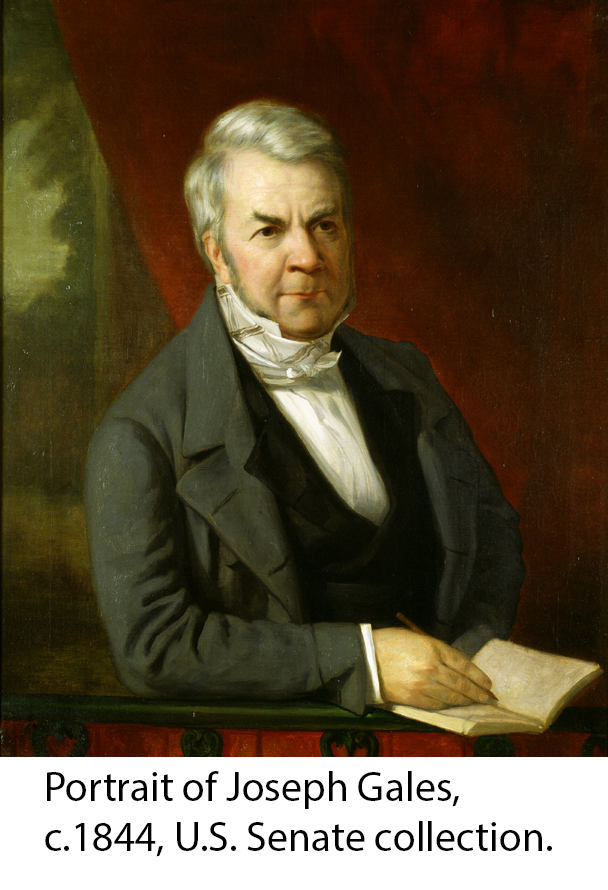 From 1833 until 1837, the Register overlapped coverage with another report, the Congressional Globe. The Globe was created by printers Francis Blair and John Rives to rival Gale and Seaton’s publication.6  It ran until 1873, covering forty years of Congressional proceedings and containing records pertaining to the first session of the twenty-third Congress through the last session of the fort-second Congress.7

Initially, Globe reports aped those that appeared in the Register: abstract-style summaries of the daily proceedings. This changed in 1851 with the thirty-second Congress, when the Globe began reporting an almost verbatim account of Congress’s actions.8

Since it appeared alongside the Register, contemporary readers assumed the Globe differed from its rival along partisan lines. The two teams of printers came from different political backgrounds, further stoking perceptions of partisanship: Gale and Seaton were Whigs (and their other paper, the Intelligencer often espoused Whig viewpoints), while Blair and Rives were open Democrats.9 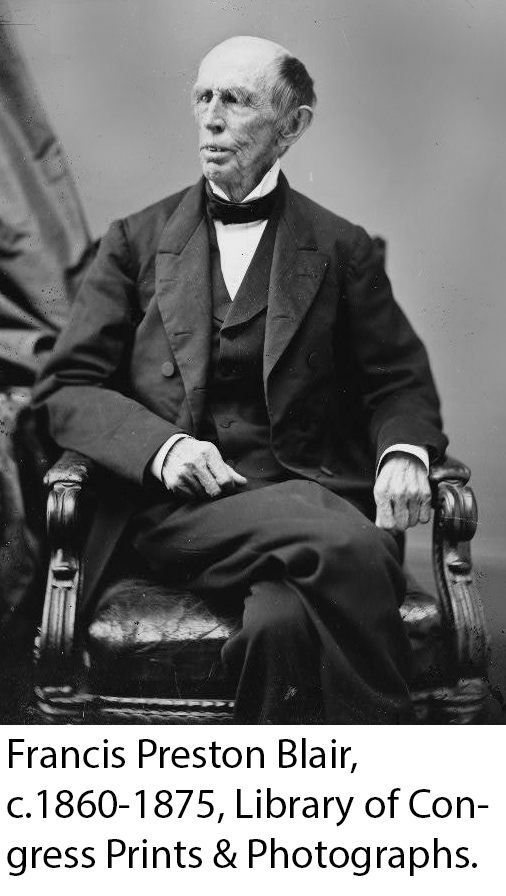 Rumors of partisanship created palpable tension. Whig members of Congress called Blair and Rives “habitual falsifies of debate,” mistrusting them and their Globe intrinsically.10 Accusations of partisanship sometimes went beyond innocuous cries and entered the realm of threats of violence. Supposedly Blair and Rives would sometimes come to Congress prepared for physical altercation, as stated by the official Senate history of congressional reporting:

The partners were met with such hostility that they allegedly carried concealed weapons in order to protect themselves against angry members of Congress.11

Perceptions of partisan leanings also profoundly affected the circulation of the two reports. Register readership went up while Whip politicians held power, and declined after the ascension of Andrew Jackson and his Democrats in Washington.12 However in truth, any differences in reporting likely had more prosaic roots: the limited efficacy of nineteenth century reporting practices and the varying ability of reporters.13

After the Globe ceased publication the era of private congressional reporting came to a close, ending questions of partiality. The task of reporting fell to the Government Printing Office, which began publishing the Congressional Record in 1873. The Record has served as the official verbatim account of the proceedings of Congress since.16

Regardless of political leanings, the Register and the Globe record some remarkable happenings in the history of the U.S. Congress. The two sources can be used to answer some fascinating questions, such as…

In what ways did the Federal Government involve itself in research into new technologies like steam power during the early nineteenth century? (Register, 1834)

What were the reactions from Senators and House Representatives to the plan to erect a statue dedicated to the late President Abraham Lincoln after his assassination? (Globe, 1866)

What efforts existed to abolish slavery in the District of Columbia prior to the Civil War? Who supported this action? Who opposed it? (Register, 1836)

What was the reaction of Congress to the report generated by Commodore Matthew Perry’s expeditions to Japan in 1853 and 1854? (Globe, 1855)

How was Thomas Jefferson’s lottery scheme received by Congress after the former president’s death in 1826? (Register, 1829)

[1] Another Paratexting blog post, “A High Indignity…and Notorious Breach of Privilege,” gives a short history of a similar evolution toward open reporting in Britain’s Parliament during the nineteenth century.

[2] Joseph Gales and William Seaton, preface to Register of Debates in Congress, Comprising the Leading Debates and Incidents of the Second Session of the Eighteenth Congress: Together with an Appendix, Containing the Most Important State Papers and Public Documents to which the Session has Given Birth: to which are Added the Laws Enacted during the Session, with a Copious Index to the Whole, Volume I, (Washington, DC: Gales & Seaton, 1825), iii, https://memory.loc.gov/ammem/amlaw/lwrdlink.html.

[10] “Reporters of Debate and the Congressional Record,” US Senate website, accessed September 27, 2018, https://www.senate.gov/artandhistory/history/common/briefing/Reporters_Debate_Congressional_Record.htm.

[12] The rise of Jackson’s Democrats likely contributed to the Register’s demise in 1837. “Reporters of Debate,” US Senate website.