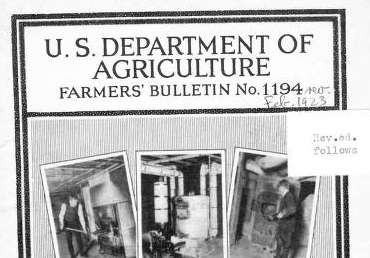 Our “Exploring” series continues with the Farmers’ Bulletin, a publication from the United States Department of Agriculture that first appeared in 1889. For over a century, the Bulletin has disseminated the latest research out of Agricultural Experiment Stations across the country with the aim of leading farmers to bigger crop yields and more rewarding home lives. Persuit of this goal has sometimes led the Bulletin to publish on subjects outside the strict purview of farming. Read on to learn more about this highly important (and occasionally odd) periodical. –Ed

Farming is a scientific profession at its core. The practice is essentially an exercise in chemistry: nutrients go into the soil, plants use these nutrients, and chemical imbalances can throw the whole system off-kilter. Yet practicing farmers have neither the time nor the resources to engage in experimentation. So where have modern agriculturalists gotten relevant scientific information to improve their methods? For over a hundred years in the United States, the answer has been the country’s Agricultural Experiment Stations and the Farmers’ Bulletin.

The USDA covered a veritable trove of subjects through the Bulletin

Beginning in 1889 and continuing into the twentieth and twenty-first century, the United States Department of Agriculture’s Farmers' Bulletin has long been a quintessential source of information for agriculturalists throughout the country. The USDA covered a veritable trove of subjects through the Bulletin, designing the pamphlet to be easily understood by a wide audience with frequent drawings and tables to supplement the text. 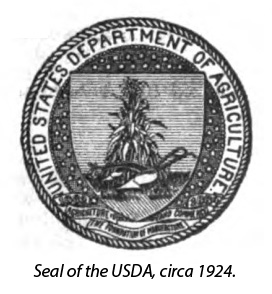 Information disseminated by the Bulletin has come mainly from research performed at Agricultural Experiment Stations located around the country. In the words of the first issue, the goal of these stations was “to make agriculture a profitable, elevating, and attractive profession.”1 They have historically performed research in an array of fields deemed to be useful to the American farmer, including such varied topics as measuring the effectiveness of different fertilizers, restoring depleted fields more efficiently, determining better ways of storing fodder for livestock, exploring effective beekeeping, producing wine and sugar, and raising poultry.2

The first station in the United States appeared in Middletown, Connecticut in 1875. It was affiliated with the chemical laboratory of Wesleyan University, and mimicked a type of experimental agricultural research institution developed in Germany during the 1850s that had already brought great benefit to European farmers.3

…the goal of the stations was “to make agriculture a profitable, elevating, and attractive profession.”

This first German station had grown from a loose organization of Leipzig farmers who sought the aid of a nearby chemist to perform research on their behalf. In 1851, the farmers were granted government assistance to open a proper experimental station. By 1866, thirty such stations existed across Europe.

Growth was similarly swift in the United States. After the formation of the first US station in Middletown, experiment stations began appearing at colleges and universities elsewhere in the country. By 1887 there existed seventeen stations across fourteen states. That year, Congress began funding this growth by awarding 15,000 dollars annually to states with agricultural colleges. This yearly appropriation had increased to $595,000 by 1889.4

The Farmers’ Bulletin first appeared as a publication of the United States Department of Agriculture in 1889, and thereafter served as a primary publication vector for research coming from US experiment stations. The Bulletin simplified the dissemination of new research by supplementing the large quantity of published work already produced by individual stations and providing an elevated platform for wide distribution of information to the country’s agriculturalists. As of this writing, the USDA has published 2,280 issues of Bulletin to this end.5

What kind of material has appeared in Farmers’ Bulletin over the years? This answer to this question is quite broad. Subjects ranged from laying down means of controlling the scourge of the cutworm (“pasturing hogs upon land supposed to harbor cutworms is a beneficial practice, as these animals root up and devour insects of many kinds”) to the magnifying effect ant colonies have on certain fruit pests (“the ant is attracted to [aphids and soft scale-insects] for their honeydew…which it induces them to excrete by stroking their bodies with antennae”), even to the proper wiring and cowling of electric motors for outdoor farm use (“a splashproof enclosure…is suitable for dairies and other places where equipment must be washed”).6 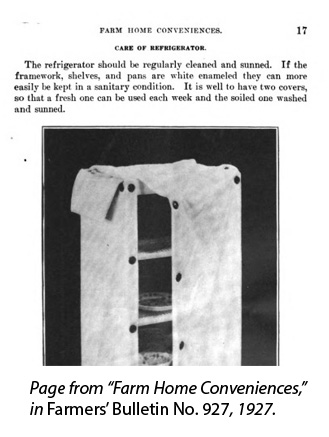 The Bulletin also covered subjects not immediately connected with farming, addressing topics relating to the non-agricultural aspects of rural communities. For instance, one Bulletin from 1921 detailed up-to-date best practices for building fireplaces and flues—necessary knowledge for those building their own dwelling places on farmland or otherwise.7

Another Bulletin from 1918 catered to the homemaking set by discussing the benefits and drawbacks of the new “iceless refrigerator” in relation to the simpler-to-operate “cold box.”8 (Spoiler: since the iceless refrigerator relies entirely on evaporating water, significantly decreases in effectiveness in the summer.) Yet another Bulletin from 1898 outlined the prevailing understandings of milk as a viable food, giving a snapshot of food science at the turn-of-the-century.9 Opening a Farmers’ Bulletin, you may be surprised by what you find!

[1] “The What and Why of Agricultural Experiment Stations,” Farmers’ Bulletin, No. 1 (Washington: U.S. Dept. of Agriculture, Government Printing Office, 1889), 11.